The Bronx has a new mystery.

On Tuesday, Haile Rivera, a Bronx political activist, posted on Twitter a photo of a license plate bearing the inscription “State Senate Emeritus 26 SSE.” The photo prompted inquiries to the NYS Department of Motor Vehicles, the State Senate and the Assembly.

“Thought all the Bronx state senate emeriti were dead or in prison? @NYSenate any answers?” was my reply to @HaileRivera’s tweet.

Rivera snapped the photo at a Bronx gas station in the Van Nest neighborhood on Tuesday morning.

Until Rivera’s tweet, relatively few of us knew that retired State Senators and Assembly Members with 30 or more years of legislative service are eligible for “Legislator Emeritus” vanity license plates.

Stacy Wood, a DMV spokesperson said, “any State Senator who has served for 30 or more years in the State Senate can apply for an Emeritus license plate.” Ms. Wood assured me that the Emeritus plate “is the same as any other custom plate that has certain qualification requirements (e.g., Veteran) and the applicant pays all the appropriate license plate fees.”

While the plates don’t carry any special privileges or benefits, they are seen as mementos of legislators long public service. Until this new program, retired state senators could purchase the very Senate chamber leather chair upon which they sat. Yep!

“Breslin said I should look into the license plate program that the Senate had recently authorized,” Connor, an election lawyer recalled.

“I didn’t apply for the Emeritus license plate until after I replaced my car which was totaled in the flooding caused by Hurricane Sandy,” said Connor.

Connor, served in the State Senate from 1978 until 2008, believes that there are “only a small handful of such plates.” He remembers Republican Senators Ronald Stafford and Roy M. Goodman being conferred “Senator Emeritus” status. Stafford passed away in 2005 and Goodman died at age 84 in June 2014.

DMV spokesperson Ms. Wood was unable to provide a list of the retired state legislators with the “Senator Emeritus” license plates. She cited the Federal Driver Privacy Protection Act (DPPA) as the reason she was unable to provide information regarding this license plate. By posting time, spokespersons from neither the State Senate nor the Assembly had responded to my email inquiries.

Connor speculated that State Senate Emeritus 26 SSE may have belonged to ex-Senator Goodman because he represented Manhattan’s 26th senate district and that the car photographed at the Bronx gas station may have been driven by a relative.

When informed of the Legislator Emeritus program, Haile Rivera said, “I think it’s a way of New Yorkers saying ‘thank you’ for your service.”

“As long as they aren’t indicted for stealing money from people or nonprofits, retired legislators deserve the Emeritus plate,” said Mr. Rivera. 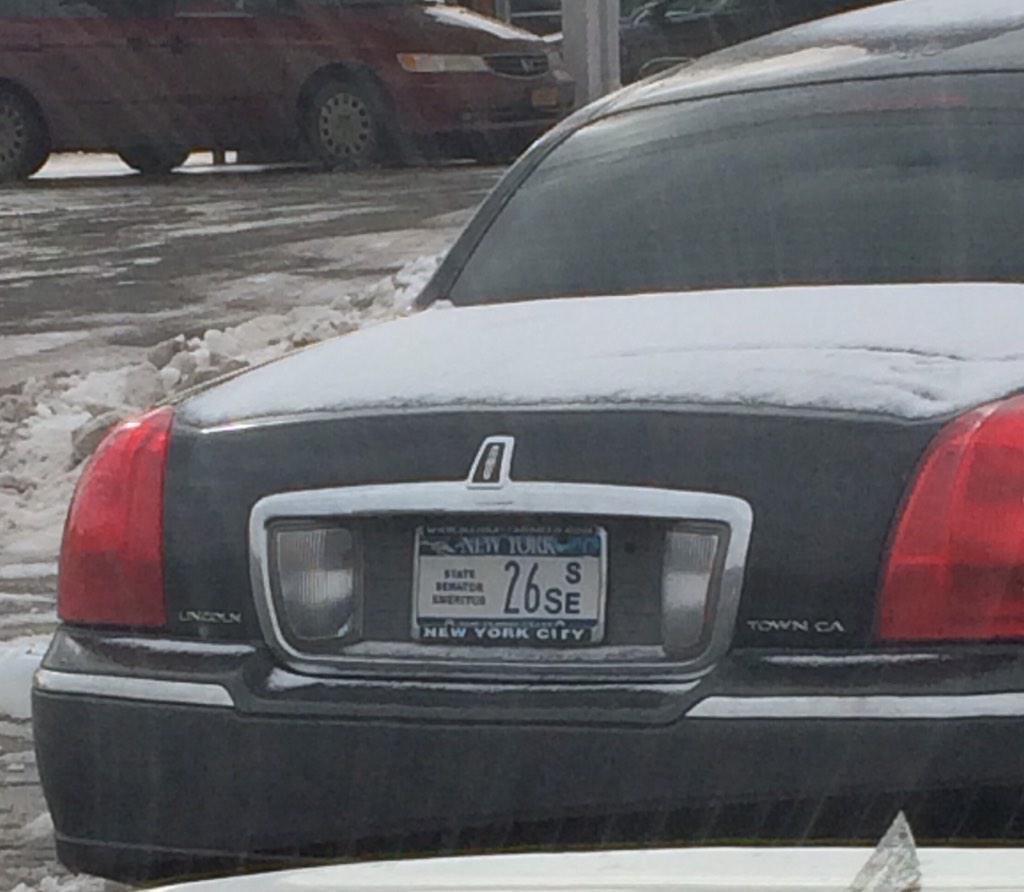